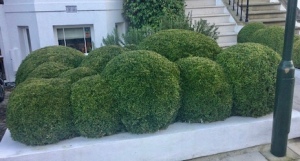 Going for a walk each day is now part of our life. It all started last March at the beginning of the pandemic. Over time many of our walks have changed as we have become fitter and more adventurous, or in response to suggestions by friends. Recently there has been another reason – some of the original walks were putting us at risk.

Knowing that keeping ones distance from others reduces the likelihood of infection, we have decided to begin and end many of our walks by taking the emptier back streets. We still end up in Richmond Park, but we now avoid the inevitable brushes with walkers and joggers on the busy Thames towpath and on parts of the road up to the Park’s main gate. This blog is about a discovery made when walking through the new routes.

In 1846 a railway link was established between Richmond and central London. Within twenty years town maps show that street after street of grand Victorian houses had been built in walking distance of the station. It is along these streets, which generally look alike, that we now walk. Set back behind the pavements are imposing, three, or four-storey semi-detached houses. In keeping, the rooms on their upper floors are spacious with high ceilings traditional of the period.

Despite all this elegance, the appearance and setting of these grand houses is now flawed. Originally, behind a low front wall or fence, each house would have had a lawn, some flower beds and a plant-bordered path leading to the front door. Instead, most houses now have a paved or concreted area serving as a car park. If loosing the garden and front wall were not enough, for access the kerb in front of the house is lowered meaning that the defining lines and symmetry of the street are also lost.

Nineteenth century streets were never the cleanest of places and, for the Victorians, the front garden helped distance home–owners from the dowdier aspects of town living. In addition the garden area providing space for the movement of people, fuel and rubbish. More importantly, however it offered a way of creating a community. Victorian homeowners were proud of their gardens which they would have seen as ornaments to be shared and which brought pleasure to the street at large and offered a chance for communication – ‘over the garden fence’.

Well, on my walks I discovered a wonderful exception to front garden plunder – the front garden at number 17. In the street there are twenty two houses and twenty one car ports leaving just one with a garden. Here, behind a low wall, sits a meticulously worked green sculpture made from box tree shrubs. Twelve years ago, sixteen shrubs were planted and now there is a series of variously sized, coalescing, green spheres without a leaf out of place; Gill, the owner, calls it ‘Clouds’, I see it as ‘Bubbles’ (see illustration). Whatever its name, each time I arrive at Number 17, I stand and stare, breathe a sigh of relief and feel thankful. Of course there are other front gardens in Richmond but they are rare and none of those I have seen are so lovingly managed.

Having this treasure makes Gill anxious. Throughout England, box trees are being destroyed by caterpillars of the box tree moth (Cydalima perspectalis). These green and black caterpillars can strip a shrub of its leaves, killing it in a week. Eerily, the caterpillar’s story echoes the current viral pandemic. In 2006, the moth, a native of China, first appeared in Germany. By 2007 it had invaded Switzerland and the Netherlands. In 2008 it arrived in the UK. In 2009 in France and so on. So far, and as the result of Gill’s meticulous plant inspection and caterpillar elimination – an effective equivalent of ‘track and trace’ – her ‘Clouds’ have been spared.

While I love the ‘Clouds’ and all they represent, box tree topiary does not appeal to everyone. Down the side of Number 17 is a narrow, artificially-lit conservatory in which there is a riot of pink, purple, orange and scarlet. Just as Gill tends her box tree shrubs, her husband grows orchids. When Rohan and I walk past Number 17 and I celebrate the sculptured box shrubs, it is always the orchids on which Rohan prefers to concentrate.

It is interesting how one exception – the front garden of Number 17 – has made me realise how awful it is when Victorian front gardens are destroyed in favour of a space for off-street parking with direct access to the street. In making these changes the front of the house and the feel of the street seems defaced.

For help with writing this blog I would like to thank Gill, Nick, Ron, Rohan and Vivien

This site uses Akismet to reduce spam. Learn how your comment data is processed.