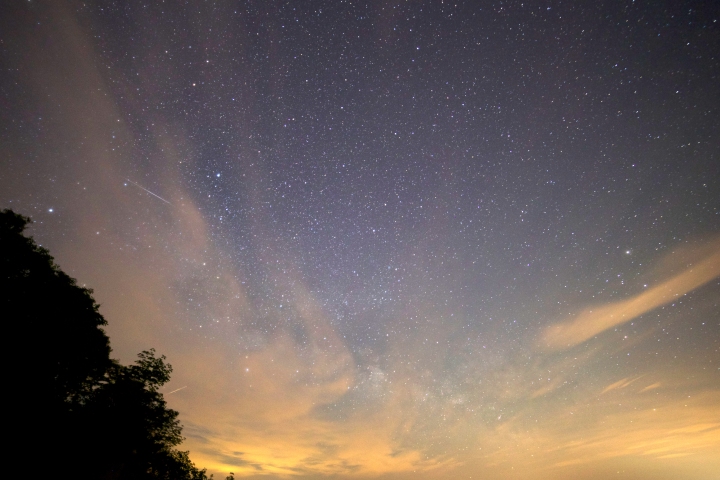 There can be few treats greater than watching shooting stars streak across the sky. But craning one’s neck in the small hours while waiting for a momentary glimpse of a meteor has its down side. Forget the cold, the neck ache next day and the fact that this August we saw none, the search brought back memories of one of my childhood nightmares. Facing the immensity of the universe made me feel tiny and inconsequential. It is that feeling that returns now when I stare at the Milky Way.

What with the unease posed by our galaxy, together with our countless more everyday struggles, it is remarkable that we human beings can ever be happy, but that is what we often are. Hoping to understand more and to improve my lot, around thirty years ago I wrote a list of my key prerequisites for happiness. I defined six – I would need to have autonomy, influence and adequate creature comforts (food, warmth etc), and to be healthy, feel wanted and be recognised. Some of those priorities have now changed; my need for having influence would no longer make the six. ‘Being recognised’, however, has become more important. The recognition I want is a reminder, a reassurance, that tells me that I exist and that I am a functional part of the human race. The thought of being completely ignored by others, or treated by them as invisible or irrelevant, would be wretched.

Such recognition can come from anybody and in all ‘shapes and sizes’. It’s not necessarily about my being given information or being asked a question. It could be a nod, a smile, a ‘good morning’, or as minimalist as the raising of an index finger as our one-time, grumpy, farmer neighbour would do when he drove past in his tractor. In all this, being recognised by an outsider seems to be particularly reassuring.

I am bothering to write about the importance of having one’s existence recognised because it is the only explanation I have for an incident that occurred recently when I was out shopping and which touched me greatly. Many people might see the event as trivial, but the fact that it had me puzzling for days afterwards means that, at least for me, what happened was important.

I was in our local supermarket looking for ripe avocados. I started whistling the tune of ‘Brave Margot’, a song written by Georges Brassens in 1953 and which is well known in France, particularly amongst those of my generation. Its melody is catchy and its lyrics, I have just discovered, risqué. A young women adopts a stray kitten and the men in the village come to ogle each day when it gets breast fed. Soon the other women of the village become angry and take revenge!

After whistling the introductory bars, I stopped for a breather only to hear the tune taken up and continued by someone out-of-sight in the neighbouring aisle. After a few moments the mystery whistler stopped and I started up and again where he, or was it a she, had left off. Next, it was my turn to stop and the unknown whistler started up again. Suddenly the tune was coming from just a few yards behind me and I turned to see the mystery songbird, a man in his early forties with a smiley face and twinkling eyes but with little else that might bring him to one’s attention. This complete stranger was slim, balding and bewhiskered, and his dress appearing more determined by need than style.

I had had no idea who to expect but it didn’t matter, for those few moments we two members of the human race were as one. The event was unprompted, no words were exchanged and we will probably never see each other again, but the deed was done. By dint of a few interchanged notes, an exchange that served no material purpose meant that we had recognised each other’s existence.

For me, that moment of my being noticed, of being reminded of my existence in the universe in this way, was extraordinarily moving. In trying to work out what was going on, my position is somewhat akin to Sartre’s view – It is other people who validate, influence and even shape our existence. Where we differ is that whereas Sartre sees others as hellish, I see them as potentially benign and positive. With outside influence being so crucial, it is easy to see why my experience at the supermarket had such a powerful effect. Moreover, being noticed in this way left me happy for days – a perfect antidote to the Milky Way dilemma.

14 thoughts on “Sartre had an Answer”

This site uses Akismet to reduce spam. Learn how your comment data is processed.